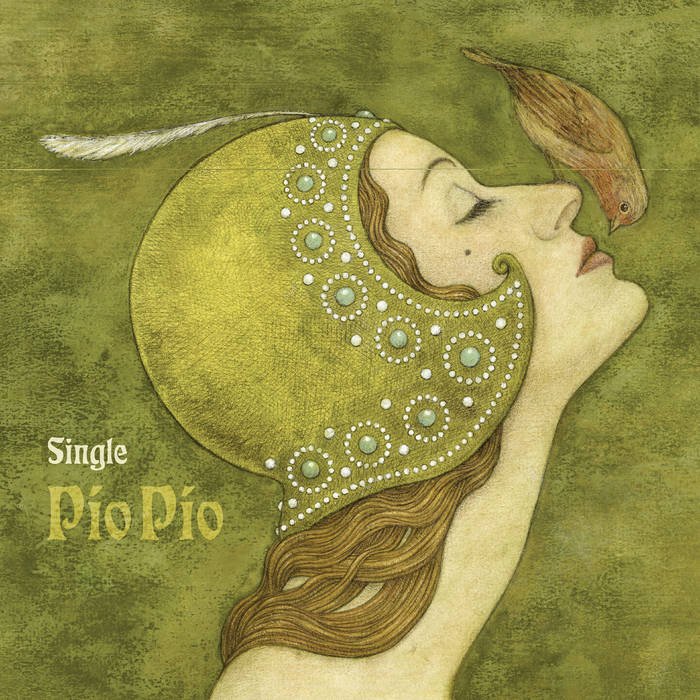 After the two first EP's, we can at least announce the release of the debut album by SINGLE. Fifteen songs of an unusual, mysterious beauty; fifteen different worlds, united by a common thread of creativity, modesty and decision. Wrapped in a beautiful art nouveau cover artwork (again, as usual, by Javier Aramburu), "Pío Pío" is a much varied album, which under the common umbrella of what we can call pop music hides such assorted styles as reggae, country, soul, easy listening, hip-hop, drum'n'bass or R&B. Teresa Iturrioz's capacity to create, with the help of her producer Ibon Errazkin (both ex LE MANS, one of the most important bands ever in Spanish pop), a sound of their own that is both original but popular and absolutely modern, is based in an exceptional flair to choose the best among the most diverse possibilities, following the path from (and going much further beyond than) where LE MANS had left it after their fabulous farewell trilogy.

"Pío Pío" is a multi-coloured, multi-layered collage created by cutting and pasting all kinds of miniatures, blending impossible melodies and beats that sound all new. Classic-tinged songs are formed over broken rhythms, song patterns are deconstructed and reconstructed from the roof. This is modern, intelligent pop music. Classic pop turned upside-down.

Four of the songs on the album had already appeared on the EP's (only the cover versions have been left out); but from these four, the new version of "Honey" puts the accent on the reggae lovers rock production, with a vocal cameo by Japanese DJ/toaster Rootseeker. And talking about covers, there is one: "Recuerdo escolar", by flamenco-prog stars Lole y Manuel.

Fans of LE MANS will be glad to discover again the voice of Jone Gabarain, and there's also vocal contributions by Spanish pop artist ANTI. Pianos and keyboards have been played by Antonio Galvañ (PARADE) and Rafael Guillermo (POP TOPS), and there's other collaborations by Eduard Alarcón (ASTRUD, VANGUARD), and Enrique Godino and Rodrigo Cortillas (both from COHETE). For all vinyl lovers we are releasing a deluxe limited edition.